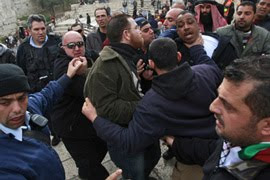 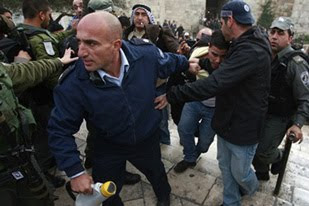 Dozens of Palestinians had gathered in occupied East Jerusalem on Thursday to celebrate the city's selection as the 2009 "Capital of Arab Culture" by the Arab League and the UN's educational body, Unesco.

The designation is a tradition that rotates among various Arab cities annually.

Israeli police arrived at the scene of the rally at the city's Damascus Gate, in an attempt to disperse the demonstrators.

Al Jazeera's Ayman Mohyeldin, reporting from East Jerusalem, said minor clashes between Palestinians and Israeli police broke out in front of the gate as police prevented Palestinians from participating in the gathering.

"This comes on the heels of a year when Palestinians in occupied East Jerusalem have been trying to celebrate Jerusalem as the capital of Arab culture.

"But throughout the course of the past calendar year, Israeli officials have prevented any kind of Palestinian celebrations [and] Palestinian national festivals taking place here.

"It is endemic to what Palestinians describe as a curbing of their right to freedom of expression."

Israel captured the area in the 1967 Six Day War, annexing it and claiming all of the city as its eternal capital.

But the Palestinians have designated East Jerusalem as the capital of any future Palestinian state.

Most cases involve a "small dose" of ill-treatment such as a slap, a kick, an insult, a pointless delay at checkpoints, or degrading treatment. These acts have become an integral part of Palestinian life in the Occupied Territories. From time to time, however, cases of severe brutality occur.

Many instances of abuse are not exposed because they have become the norm, and, for Palestinians, filing complaints is very time consuming. Furthermore, many Palestinians, primarily those who entered Israel without a permit, even refrain from filing complaints in cases of severe brutality because they fear that filing the complaint will only bring harm on themselves. Based on past experience, many do not file complaints because of lack of trust in the system – a system which tends not to believe them, and which tends to protect rather than prosecute those who injured them. The numerous restrictions on movement imposed by Israel in the Occupied Territories make it very difficult for Palestinians who want to file complaints to do so.

Israeli law, like international law, allows security forces to use reasonable force in self-defense and for duty-related purposes such as dispersing rioters, arresting suspects resisting arrest, and preventing a detainee from fleeing. The law does not, however, allow beatings, degradation, or ill-treatment of persons who are not rioting, resisting arrest, or fleeing. Also, the requirement that reasonable force be used in those instances where force is allowed demands that the measures taken be limited in severity to that which is necessary to prevent commission of the offense.

The acts described in testimonies given to B'Tselem and to other human rights organizations deviate greatly from what the law allows, and they constitute flagrant violations of human rights. In this context, an Israeli district court held that, "The exercise of illegal force by police officers is a phenomenon characteristic of regimes that are abhorrent, and undemocratic, of the kind that trample on human rights. It is misuse of the [police officer's] function."

Cases of beatings and abuse receive special condemnation. For example, the former Minister of Public Security, Shlomo Ben-Ami, stated: "I relate with great severity to brutality by police officers. I think that that, among the possible sins committed by the police, this is gravest, because the police cannot fight violence by employing violence against citizens." Regarding another incident, in which a soldier beat a settler from Kedumim, the IDF Spokesperson responded that, "The IDF views with great severity the case and violence by IDF soldiers."

These condemnations, however, remain solely declarative. Security forces, meanwhile, misusing their power, continue to abuse and beat Palestinians, among them minors. Both the army and the Border Police have yet to make it unequivocally clear to security forces serving in the Occupied Territories that it is absolutely forbidden to abuse and beat Palestinians, and their educational and information actions in this regard have been more lip service than a frank and honest attempt to uproot the phenomenon once and for all.

Until a few years ago, the Israel Police Force itself investigated claims of police brutality. In 1992, handling of these claims was transferred to the Department for the Investigation of Police (DIP) in the Ministry of Justice. B'Tselem forwards to the DIP testimonies it receives regarding police brutality against Palestinians and requests that the matters be investigated and that the offending police officers be prosecuted. In many cases, the DIP responds that the file is closed for reasons such as "offender unknown" or "insufficient proof." At times, the DIP decides to close a file following an incomplete investigation or when the complainant was unable to reach DIP offices to give testimony because the complainant's request to enter Israel was rejected. And in those cases in which police officers are prosecuted, they receive light sentences.

The defense establishment's refusal to issue a message of this kind to forces serving in the Occupied Territories has far-reaching consequences. If a message is sent to security forces, it is that even if the establishment does not accept acts of violence, it will not take measures against those who commit them. The effect of such a message is that the lives and dignity of Palestinians are meaningless and that security forces can continue, pursuant to the function they serve, to abuse, humiliate, and beat Palestinians with whom they come into contact.

Israel is the occupier in the Occupied Territories and as such is responsible for the safety and wellbeing of the Palestinians who live there. To perform this function, B'Tselem urges the Israeli authorities to adopt, at least, the following measures:

Soldiers assault elderly farmer while working his land next to the Separation Barrier, December 2009

Testimony: Soldiers assault elderly farmer while working his land next

I live in Deir al-Ghusun, which is in Tulkarm District. I have six sons and am a farmer.

I have an 86-dunam plot of land that is situated southwest of Deir al-Ghusun. When they built the separation fence, about 25 dunams of my plot were destroyed. I was left with 40 dunams of land on the eastern side of the fence, and about 50 dunams of olive groves on the western side.

About eight o’clock this morning [2 December]. I left my house to go to my land on the eastern side of the fence. I took my donkey and an olive seedling. I wanted to plant the seedling on the land, on which I had already planted zatar seedlings and olive trees. After I planted the seedling, an army jeep passed by. It came from the direction of the agricultural gate of Deir al-Ghusun, which is about 250 meters south of my land. The jeep travelled from the western side of the fence, and was heading south. It stopped after it passed me and two soldiers got out. The jeep continued on its way. The two soldiers walked toward me after passing through one of the small army gates along the fence. One of the soldiers was tall and pale-skinned, had a braid of hair in the back, and wore a skullcap. The other soldier also was tall and pale-skinned, and was heavyset and had a small goatee.

As they walked over to me, which took three minutes or so, they swore at me and insulted me, and they also cursed my wife and daughters. When they got close enough, one of them hit me in the face and forehead with his rifle butt. I fell to the ground, and bled a lot, with the blood running onto my chest and kaffiyah. When I fell, the other soldier stepped on my chest, which hurt a lot. The first soldier continued to hit me in the face and the sides of my body. The beating lasted for about five minutes. I cried out for help, so that farmers on their land would come and rescue me and give me first-aid.

A few minutes later, I managed to get up and go over to my donkey, which was alongside me. I climbed on a rock and succeeded in getting on the donkey. The soldiers left. I was still bleeding, so I continued to cry out in hope that a farmer would hear me and take me to the nearby medical clinic. But nobody heard me.

In about 15 minutes, I reached houses in the town, about two kilometers from my land. A resident took me to the house of Dr. ‘Azmi a-Zanabit, but he wasn’t home. The resident summoned a Red Crescent ambulance and called my wife and children, who came quickly.
The ambulance arrived within 20 minutes or so and took me to Thabet Thabet Hospital. The physicians in the trauma unit examined me and took X-rays. They found I had been injured in the back of the nose, in addition to the nosebleed. My forehead was swollen and I had chest pains. They admitted me for monitoring and treatment.

The soldiers assaulted me in an inhumane way, though I didn't do anything.

Ahmad Jaber ‘Odeh Ghanem, 75, is a resident of Deir al-Ghusun in Tulkarm District and a father of six. He gave his testimony to 'Abd al-Karim a-Sa'adi on 2 December 2009 at Thabet Thabet Hospital, in Tulkarm. 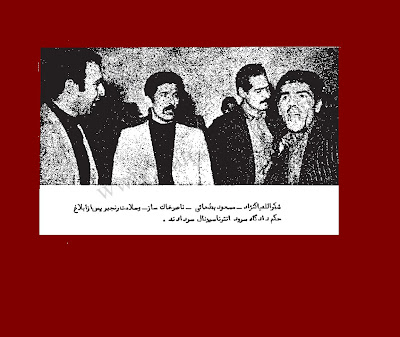 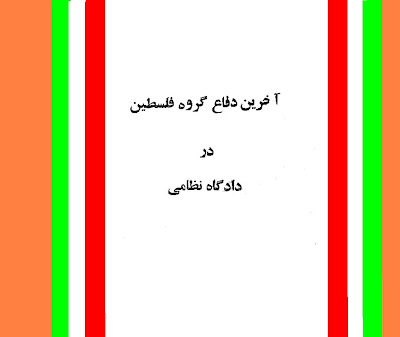 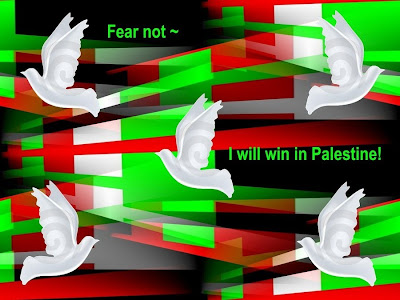